My First Taste of Nice
by Student, Austin E.
0
Share My first taste of Nice has been fantastic so far. The group arrived on the first day and got settled in immediately. We all made friends super fast and got right to fun. On our first day, the administrators gave us a tour of the surrounding area and took us to the beach. We came back and ate at a fantastic restaurant that was right next to our residence. After dinner we all went to a popular French ice cream place called Fenocchio’s. Although there wasn’t much time on the first night the program did a great job of showing us around Nice. 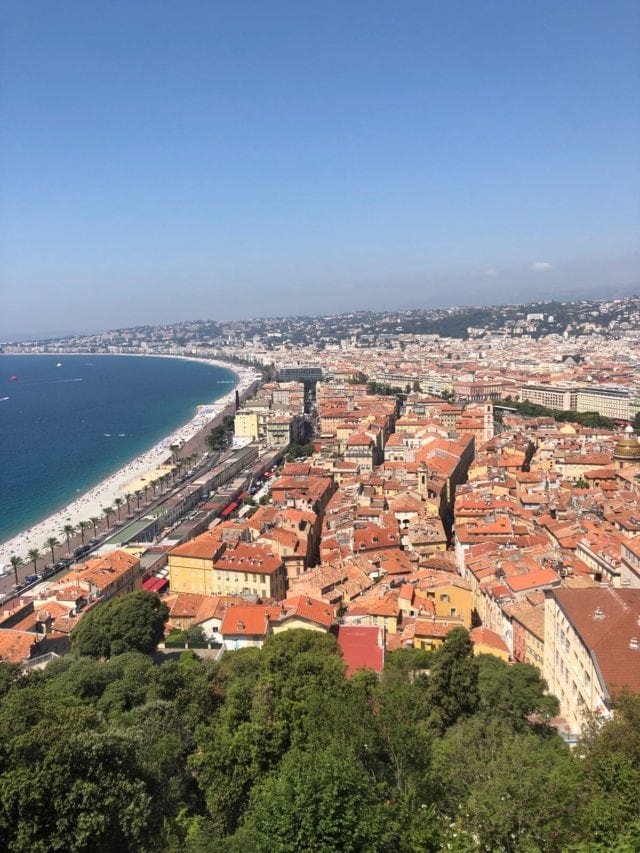 The next day was Friday, and the morning started out at a beautiful park. We took a brief placement test so the students could be placed in their correct classes. After that, it was time to explore Nice so my friends and I decided to check out Old Nice. By the time we got back our food had arrived and we all ate from a French/Italien restaurant. They brought the food back to the residence which was really nice after a long day. Once everyone finished with dinner we decided to venture to the beach. It was really warm so the water was perfect for swimming. We watched the sunset while relaxing in the water until it was time to go back. At the residence, everyone gathered in a common room to play cards for the rest of the night. It was an eventful second day! The weekend had arrived which meant that the program got to travel to a different place. We went to a special beach called Beaulieu sur mer and it was breathtaking. The water was a clear blue with tall mountains lining the background. The program had great things planned for us that day. After getting settled in they took us to go tubing. It was a thrilling adventure and our raft even flipped during the ride ( which was definitely the best part). After my group was done tubing we switched with the kids on paddle boards. The ocean was really calm so the rides were smooth and very scenic. After the watersports we walked around the outskirts of the beach and found a place with fresh coconut water. It was a refreshing snack after a long, fun day in the sun. Upon arrival back in Nice, we went to a popular restaurant buried in the streets of Old Nice. It was my favorite cuisine so far and I plan on returning there later this trip! On Sunday the group met up with the St. Laurent kids and took a bus to Monaco! We were all excited to be going to such a gorgeous place. There were options of what to visit when we got there and I chose the oceanographic museum. It was interesting to learn about the Mediterranean sea and what fish live in it. I loved how well run the entire museum was and the aquarium displays were really grand. For lunch we got money from the program and they let us find our own food in Monaco. My friends and I pooled all of our money together and went to a pretty nice restaurant. The food was the new experience that I was always wanting when deciding to come on the trip. Then we stopped in Eze which is one of the most beautiful towns that I have ever been to. After a tour of the local perfume factory, the group when on a hike up to a scenic view of Eze. At the top, we saw a fortified Medieval castle. It felt like I had been transported back in time. This trip left me not only breath taken, but excited for what is to come next! Today (Monday) was our first day of real French class. I was honestly a bit nervous about how fun the class would be. We met after breakfast and walked to a park that overlooked part of the city. My worries instantly vanished when our professor explained all of the fun stuff she had planned. The class flew by and I felt much more confident in my speaking after only 1 session. I can’t imagine how much better I will be by the end of the month. After class we ate lunch at the residence and began our electives. I split into the conversation group and we played some fun games in French. My favorite was the French charades competition. We are planning on going to the beach after dinner today, and I am sure it will be a blast!